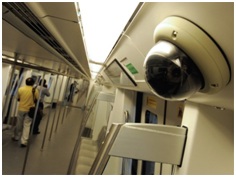 At the upcoming new corridors of Delhi Metro, commuters will be under watch from the moment they enter the metro premises. The Delhi Metro Rail Corporation (DMRC) is installing state-of-the-art CCTV cameras at its new corridors that will become operational this year, taking the total number of cameras in metro network from the present 9,029 to more than 13,000.
At present, there are 183 operational stations in the Delhi Metro network, which will go up to 227 this year with the opening of the remaining sections of the Magenta and Pink Lines. DMRC and Central Industrial Security Force (CISF) plan to provide a tight security blanket across all the new corridors and stations and as a result, the total number of CCTV cameras installed at stations and depots will go up by almost 45%. Moreover, the new cameras being brought by the corporation are technologically more advanced than the present ones installed at operational stations.

“Cameras are procured and maintained by DMRC and the new ones have the best and latest features,” said a senior CISF official. “The live feed from the CCTV cameras are monitored by both DMRC officials such as station controllers and our personnel as part of parallel monitoring,” he said. CISF has two security control centres – one at Shastri Park from where Yellow, Red and Green Lines are monitored and the other at Metro Bhawan near Barakhamba Road, from where Blue, Violet, Pink and Magenta Lines are monitored.

The 9,029 CCTV cameras in the metro network are installed at metro stations, including station’s mid shafts and ramps, apart from those at depots. “Usually, 65 cameras are installed in an underground station, 55 in an elevated station and 28 cameras in each depot. The numbers may change depending on the size of the station, interchange facility and number of exist and entry points,” a DMRC spokesperson said.