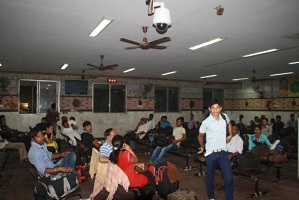 To improve monitoring and curb crime at railway stations, a total of 1,938 CCTV cameras will be installed in 78 more stations under South Central Railway (SCR), a senior official has said.
“Till 2016, only 42 stations were provided with CCTV surveillance systems having 682 cameras. Proposals have been finalised to install 1,938 CCTV cameras in 78 more stations,” SCR-Railway Protection Force (Inspector General) and Chief Security Commissioner Sanjay Sankrityayan said.

Security has been beefed up with the installation of under vehicle scanners, baggage scanners and bomb detection and disposal equipment in Secunderabad, Hyderabad and Tirupati railway stations, he said. Proposals have been sent for approval to the Railway Board to set up similar Integrated Security Systems at Vijayawada, Kachiguda and Aurangabad stations, he added.

In 2016, there was an increase by 32.63 per cent in detection of railway property offences and 842 persons were arrested for involvement in 658 cases, he said. As many as 814 children were rescued by the Railway Protection Force (RPF) in 2016 as compared to 421 in the previous year. They were rescued from various trains and reunited with their families, the senior RPF official said. An exclusive security helpline number 182 (toll free) was launched by the railway administration for the convenience of passengers and commuters can use this number for issues related to security, he added.