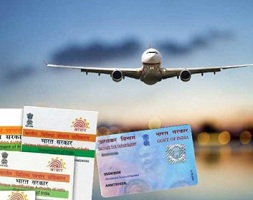 SITA, an air transport IT and communications service provider, along with Indian airports is now all set to help India transcend into fully biometric air travel. Government’s “Digiyatra” concept is soon going to make air travel for Indians paperless soon. As per Airports Authority of India (AAI), travellers flying through Vijayawada, Varanasi and one more airport will now beat the lines by sharing their Aadhaar details with the airport authorities.
“Leveraging India’s national Aadhaar biometric identity system with our Smart Path technology, SITA will deliver a seamless biometric experience across all airlines and airports, both domestic and international, in India,” said Maneesh Jaikrishna, SITA Vice President, Indian Subcontinent, Eastern and Southern Africa.

Speaking at the Air Transport IT Summit in Jaipur, Jaikrishna also said that this move will allow passengers to use their biometric identity wherever they travel. He said that citizens’ national biometric identification cards (Aadhaar) and foreigners’ passports would be linked with the databases of airlines, airports and other stakeholders. The authorities are also promising a secure travel experience for the same.

According to a research appearing in SITA’s “2017 Passenger IT Trends Survey”, Indian passengers show greater willingness to use biometrics to speed up their journey through the airport. SITA is also set to solve the baggage issues for the passengers. “Soon, 15 airports in India will start getting real-time information on the status of passengers’ baggage, which will significantly reduce the chances of baggage mishandling,” Jaikrishna said. AAI, which manages 126 airports across India has expanded bag management by introducing “BagManager” to SITA’s management system. The move will help 15 airports in India to improve the baggage handling operations.