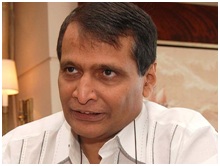 Civil Aviation Minister Suresh Prabhu has ordered a safety audit of all scheduled airlines and airports, amid recent incidents related to safety of passengers. The development also comes on a day when several passengers on a Jet Airways flight from Mumbai to Jaipur suffered nose and ear bleeding after the crew “forgot” to turn on a switch that controls cabin air pressure.

Prabhu has directed officials concerned to prepare a comprehensive safety audit plan, which involves assessment of safety parameters of all scheduled airlines, aerodromes, flying training schools and MROs immediately, an official statement said. Further, he has directed that “safety audit should be commenced forthwith and a report to this effect should be submitted for his perusal within 30 days”. The minister has ordered an enquiry into the Jet Airways incident. The Aircraft Accident Investigation Bureau (AAIB) is conducting an enquiry into the incident, the statement said.

Jet Airways flight 9W 697 going from Mumbai to Jaipur had to return to Mumbai. The flight commenced from Mumbai at 5.50 AM but had to return to the city after an hour and had an emergency landing. According to DGCA sources, the crew members forgot to select bleed switch due to which cabin pressurisation couldn’t be maintained. The cockpit crew has been derostered, pending investigation, said Jet Airways. Civil Aviation Ministry has taken cognizance of the matter and have asked DGCA to file a report immediately.