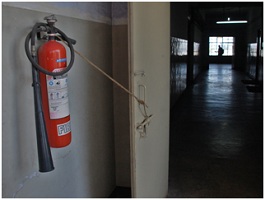 Thousands of patients visiting the emergency department of All India Institute of Medical Sciences (AIIMS) will be sitting ducks in case of a fire as the fire extinguishers installed there are way past their expiry dates. On a recent visit to the country’s premier medical institute, it was discovered that all the fire extinguishers on the ground and first floors of the emergency department are long due for a change. Some of them expired as far back as March 2016, according to the labels pasted on them.

“This is a direct violation of the Fire Services Act on the part of the management when AIIMS is already very prone to fires. A minor fire occurs almost every 3-4 months here,” says Atul Garg, Chief Fire Officer, Delhi Fire Services. “These extinguishers help contain the fire between the call and the arrival of fire tenders, and overdue extinguishers may or may not work when needed,” he added. There are 10,000 to 15,000 patients who visit AIIMS every day with thousands gathered at the emergency ward at any point of time.

In the past two-and-a-half years, AIIMS has seen several small and big fire incidents. While the latest incident of fire occurred at the pathological lab in December 2016, the last major fire was in February 2015, in the porta-cabin which housed legal files in the AIIMS administration block. Thousands of files containing important data were destroyed. “This is really bad at our end that fire extinguishers are not up to the mark,” said Dr D K Sharma, Medical Superintendent, AIIMS. “I will personally look into the matter and make sure that necessary steps are taken by the staff concerned,” he added.

Every hospital in the city requires a fire safety clearance and proper safety standards. As per the Delhi Fire Services Act 2010, every city hospital needs to adhere to norms laid out in the legislation to get the fire clearance. Deepak Kumar, the Deputy Chief of Security Officer at AIIMS, who is responsible for the upgrade of fire equipment, said, “I will now look into the matter and get these refilled very soon. We have had these extinguishers for long and they generally do not give any problems.” In a CAG audit conducted last year, it was found out that majority of Delhi hospitals either do not have proper fire exits or lack the necessary safety equipment.