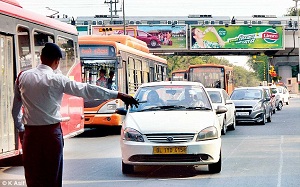 Aurangabad police may soon be armed with a new weapon to point and shoot at traffic norms violators — handycams. The primary aim is to stop the violators from getting physical with the policemen manning traffic. The Mumbai Police’s traffic unit has come up with a similar idea and armed its personnel with portable camera devices that can be plugged in jackets and put up on the uniform. The Aurangabad police chief has made it mandatory for the traffic personnel to record on video, checking of vehicles during surprise all-out operations. This has already put a check on altercations between police and motorists.

“When the video camera is on, police and the commuters both become conscious and dare not think of violating rules. They behave in a responsible way and speak to each other politely,” an officer privy to the development said. Aurangabad Commissioner of Police, Yashasvi Yadav, said video evidences in such cases would help better conviction and deter the unruly elements from attacking policemen or any other government employee around. “The handycams will be used at spots without CCTV cover and also at busy traffic junctions,” Yadav added.

The highest number of attacks on policemen has happened when police conduct drives against helmetless riders. This has prompted police to consider use of handycams at the strategic traffic junctions. Those attacking or assaulting any government servant or using criminal force to deter a government employee from performing his or her official duty are booked under section 353 of IPC. But under this section, the police often fail to ensure remand of the accused. The reason being that in most cases, there is nothing to recover from the accused and the court sends the suspect to judicial custody.