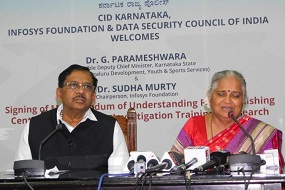 The state police’s cyber unit could finally get an opportunity to crack down on tech-savvy cyber criminals as a Centre for Cybercrime Investigation Training and Research (CCITR) is being set up in the city. It’s a joint initiative of Infosys Foundation, Karnataka Police and the Data Security Council of India (DSCI). An MoU in this regard was signed at the Vidhana Soudha in the presence of Home Minister G Parameshwara, Sudha Murty, chairperson of Infosys Foundation and senior police officials from the Criminal Investigation Department.

The centre will be set up at the CID Carlton Palace headquarters in the city and the main objectives of this project include ensuring the development of an SOP for cyber crime investigation to ensure maximum efficiency and also provide special training to police officials to keep them updated to ensure quick and effective probes resulting in conviction. The proposed centre is expected to have a digital forensic resource centre, malware research centre, exclusive wings for research & development, forensic investigation support and a legal and policy research unit. Once operational, it will be a proud milestone for the CID and the DSCI to curb misuse and unethical use of technology,” said Sudha Murty.

As per the MoU, the charity arm of the IT giant will bear the set up costs and also operational costs for five years apart from upgradation and maintenance of the existing cyber lab established in 2007 at the CID headquarters. The centre proposed with a built up area of 9600 square feet is expected to have separate wings for training police personnel in IT enabled investigations. The Infosys Foundation has committed Rs 8 crore for the infrastructure, including digital libraries and latest computers. Despite being rated as the IT capital of the country, the cyber crime unit of the state police is still grappling with resource and technology related issues