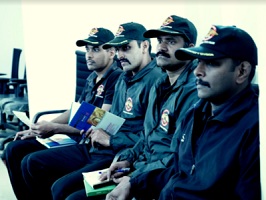 Spread across 1,100 acres and housing more than 200 technology firms that employ thousands of people, Electronics City is a globally known hub, which also means that threat perceptions are high. With changing times and types of attacks, the Electronics City Industrial Township Authority (Elcita) is now training its personnel to deal with Paris-type terror attacks — where a small group of armed men springs surprise attacks, killing tens of people before they can respond — and hopes to overhaul the way its people are trained in future.

“Such attacks can happen anywhere. With 200-odd firms, including Infosys, Siemens, Wipro, TCS and others, Electronics City is a noted place and can be a target. There’s this feeling that nothing will happen here and everything will happen somewhere else, given that security in the hinterland is the last priority in the country. We wanted to do away with this perception and equip ourselves with new techniques,” said Elcita chief security officer Lt Col (retd) Ishwar Doddamani.

In the last week of February, some 25 personnel from Elcita, including a few experts trained in offensive tactical response (OTR), a unique counter-terror tactic and training method jointly offered by Synergia Foundation along with elite special forces experts from Switzerland, France, Germany, Austria, Israel, UK, US and India. Stating that he had deputed his men to train in OTR to understand modern methods and tactics, Doddamani said there have been multiple takeaways from the training, the principal one being the need to train even those in non-security roles.

The training, Doddamani said, was mostly about how to save lives. “This is important as in such type of attacks, the goal is to prevent casualties and hold on until help from armed experts arrives.” Elcita has one company of the Central Industrial Security Force (CISF), about 100 private security personnel and guards hired by each of the 200-odd private firms. “We are also in touch with the state government’s Garuda force, Suraksha and other teams. However, they cannot be the first responders always; this training is important as it targets the first responders,” he said. Tobby Simon of Synergia Foundation, which brought Reuven Wertheim, an expert from Switzerland, who has been providing specialised training in European countries, said: “We saw participation from 70 Bengaluru police inspectors, three officers from the National Police Academy and 30 railway police personnel.”