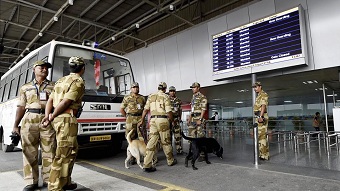 The Central Industrial Security Force (CISF) and National Security Guards (NSG) can shoot down so-called Unidentified Flying Objects (UFOs) seen near Delhi’s Indira Gandhi International Airport, where several such instances have been reported in the past year. While the term UFOs is generally used in the context of alien aircraft, in this case, they refer to any unidentifiable object flying near the airport. These could be drones or balloons.

A committee set up the home ministry has authorised the shooting of these objects. According to senior CISF officers, a March meeting held to review the Delhi airport’s security ended with several changes being made in the rules of engagement with flying objects. The home ministry has been considering a policy allowing CISF and NSG to shoot down such flying objects across the country since last year.

“The review committee comprised officials from the Ministry of Civil Aviation (MOCA), Bureau of Civil Aviation, Directorate General of Civil Aviation, the Delhi Police, CISF, NSG, Delhi International Airport Ltd (DIAL) and other agencies concerned. The MOCA had sought suggestions on how to handle UFOs at IGI. In this regard, certain guidelines were made and CISF and NSG were given permission to shoot down UFOs identified as dangerous,” a CISF officer said on condition of anonymity.

He said there are certain parameters based on which the agencies will take such action. The flying object must deemed a threat, carry explosives or harmful items such as chemicals, be near a sensitive area of the airport or engage in any act harmful to human life or machinery. Only in such situations will the UFOs be shot down.” Until now, CISF and NSG officials had to convey the threat to all agencies concerned, trace the object and then decide on ways to bring it down.

In April, a balloon-like object grounded an Air India flight with 188 passengers on-board after it got stuck in the engine of the Delhi-to-Srinagar flight. The plane had to make an emergency landing. Officers said that had it been a drone, the aircraft could have been severely damaged . Last December, an unidentified flying object led to disruption of flight operations and affected as many as 15 departures and arrivals at the Delhi airport. A detailed hunt for the UFO was made but it could not be found, despite the air traffic control (ATC) capturing it on its radar. A week before that, an Air India flight arriving at the IGI Airport faced off with a drone-like object, prompting the pilot to immediately report the matter to the ATC. Seconds later, another flight that took off to Leh, also reported spotting the same flying object.