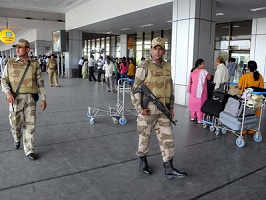 To monitor security at the country’s airports and vital installations like nuclear and space organisations, the Central Industrial Security Force, for the first time, will track social media trends and use data analytics for which the central force has created a ‘media lab’ and a Pattern Research for Institutional Social Media (PRISM) unit at its base in Chennai. A special team of CISF officers has been trained to track social media trends, news, reports and indicators across various platforms, collate them and disseminate them as “actionable intelligence” to various airports and sensitive installations.

The CISF will scan online sites like Twitter, Facebook, YouTube and Flickr to check suspicious and sabotage-like activity against the assets it guards. The platform, developed by IIT-Delhi, is used by Intelligence Bureau (IB) and Mumbai Police to keep a check on security issues. CISF Director General O P Singh said, “The whole world is living in an age of infinitely complex virtual networks where it is difficult to trace where our information is coming from or going to. Internet today is no longer confined to a select few. Rather, it has put exceptional power in the hands of the common man. It has the capability of snowballing into an uncontrolled chain reaction if there is no surveillance or monitoring to prevent any catastrophe as witnessed during events like Arab Spring. Hence, a social media lab is an essential tool to monitor and take effective coordinated action so that the internet remains a boon rather than a bane”.

The CISF will take a three-pronged approach which involves monitoring, profiling and analysis; timely action through coordination with various agencies; and making this initiative successful to thwart any attacks on airports and strategic installations. “The main purpose of this project is to effectively monitor social media giants like Twitter, YouTube, Flickr etc to search for a pattern that endangers the security of our formations and keep an eye on whispers echoing in the corridors of these institutions which can act as a preventive mechanism,” Singh said.