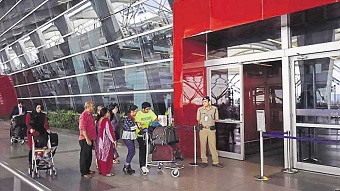 Air travellers will soon be able to avail of a package in which they can hire assistants to help them complete check-in formalities, speed them through security check and immigration, wait for their flight at airline lounges, and be taken to the boarding gate in a golf cart, even if they are travelling economy class, according to three government officials familiar with the development.

The officials added that the Union Civil Aviation Ministry is set to approve this new ‘meet and greet’ plan, under which airports across the country will hire a company for the facilitation of passengers for a price that entitles them to additional services. The expected price for the service is around Rs 5,000 per passenger, said one of the officials. Departing passengers will be received in the parking area and will be provided assistance at every point till they board the plane. Similarly, those arriving will be received at the aerobridge, the civil aviation ministry official said.

“Currently, there is no procedure to issue an airport entry pass to a person to facilitate passengers. Commercial entities, mostly hotels, are given commercial passes, but even then they are allowed to receive passengers only from the Customs area. Now, the proposal is to give all-area passes to employees of the ‘meet and greet’ company,” said a second civil aviation ministry official. The official added that only one company per airport will be given a license for the service, and the airport operator will have to set its own rates. The ministry will not interfere in the price for such service, he added, saying the average cost was expected to be Rs 5000.

Such services are available at airports round the world. In India, they exist in an unorganised manner. Now, it will be organised – the company can have a tie-up with a lounge, it will also be able to provide access to the first-class lane for frisking, where there is hardly any queue,” said an official from the Bureau of Civil Aviation Security (BCAS). The porter service will continue, so will the wheelchair service provided by airlines for old or physically challenged passengers. “Many passengers opt for the wheelchair to avoid walking at long terminals. Those who can afford it will now be able to pay and use these add-on services,” the BCAS official added.

According to a security expert, this will not compromise security since the background of the employees hired by the company will be thoroughly checked . “If someone’s mother is old and travelling alone, the service will help a lot. This will also help first time travellers, who can pay for the service…,” said Mark Martin, founder and CEO of Dubai-based Martin Consulting.