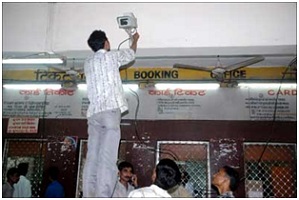 Mumbai’s lifeline may become more secure with the Mumbai Police tapping into the video feeds of CCTV cameras installed across the suburban Railway network. This will ensure a coordinated response by security agencies during emergencies and enable better monitoring in times like festivals when the system sees huge footfalls. This framework is part of the Rs 949-crore Mumbai CCTV surveillance project floated after the 26/11 terror attacks, wherein a network of 4,717 cameras has been installed at 1,510 sensitive locations. Under the collaborative surveillance project, the state wants to tap into the video feeds of 102 high-value targets like malls, five-star hotels, shops, banks and Railway stations, to improve surveillance, enable a faster response through real-time streaming, and enhance the level of protection for these institutions. The feeds will be accessed based on requirements and worst-case scenarios and after the consent is secured from these establishments. The official said this would help secure the Railways, which is particularly vulnerable.

“Once an incident happens, the system integration will ensure immediate action and a common response,” said a source, adding that they planned to complete the “technical handshake” with the Railways in June. He added that so far, 50 of the 102 establishments had consented to the arrangement. “From this month, we will integrate all the cameras on railway stations in Mumbai with the Mumbai Police command and control centre. We will check the footage as and when required. For instance, if there is any major incident, then we will also sift through the footage of the railway cameras for leads,” said a senior officer from Mumbai Police. According to officials, 1,063 CCTVs have been already installed and another 1,701 will be installed on the Western Railway stations in Mumbai, while on the Central Railway, the number of installed cameras is 2,914.