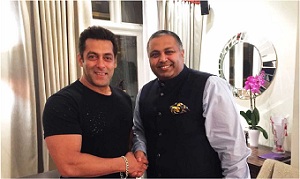 CP PLUS, India’s Largest Security & Surveillance brand, has signed up superstar Salman Khan. CP PLUS – which is already riding a wave in the country with its innovative campaign ‘Upar Wala Sab Dekh Raha Hai’ adds another feather to its cap with this association. CP PLUS aims to reach out to the masses with this partnership further making them aware of the need for intelligent security and surveillance in society at all levels.

The brand will come up with the next level of its communication on Security & Surveillance through its new campaign, taking it to the next level with Salman Khan in action. On this partnership, Mr. Aditya Khemka, MD, CP PLUS said, “We are excited to partner with Salman Khan as the super star of Bollywood, exhibits the same Passion, Trust, and Reliability as CP PLUS. Both Salman and CP PLUS are action-oriented brands and believe in re-inventing from time to time.” Hence, this association and the forthcoming campaign will be aligned with the company’s plan to further position CP PLUS as an Intelligent, Smart and reliable brand. The partnership with Salman Khan is planned to further enhance the deeper reach in the Indian market.