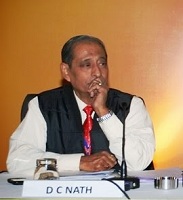 Mr DC Nath, former Special Director, Intelligence Bureau, and a well known figure in the security domain passed away on December 10. Mr Nath was associated with the International Institute of Security and Safety Management (IISSM), headquartered in New Delhi, for over 14 years, first as the Executive President & CEO and then as the President & Director General, between February, 1997 and March, 2011.

The author of a highly acclaimed book, “Intelligence Imperatives for India”, Mr. Nath earned high plaudits from all around for two of his very significant presentations on: “Revisiting the Future of India” (2005, London) and “Lessons from India for the War on Terrorism” (2007, USA). Known for his professional training ability, he was affectionately addressed as the “Dronacharya” and was considered a security ideologue and as such was in demand from Corporate Houses for talking to senior business executives as also to organize customized training courses for their security personnel. Mr Nath was the winner of both the honours, Indian Police Medal for meritorious services and the President’s Police Medal for distinguished services.

His name figures in the American Police Hall of Fame, a Trust of the US National Association of Chiefs of Police. The International “Who’s Who Historical Society” included his name in the 2010-2011 edition of the “International Who’s Who of Professionals”.

SECURITY TODAY mourns the passing away of Mr Nath and offers condolences to the bereaved family.