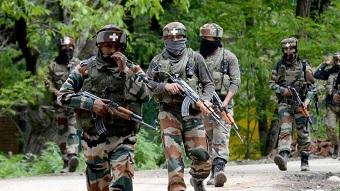 In a big boost to the Indian Army, the Ministry of Defence (MoD) has initiated the process for buying at least 6.5 lakh assault rifles under the Narendra Modi government’s ‘Make In India’ initiative. According to reports, the MoD has floated the Request for Information (RFI) for 7.62×39 mm calibre assault rifles, with an effective kill range of 300 metres.
The new assault rifles will be manufactured by the Ordnance Factory Board. Defence sources say that the whole process will be under the ‘Buy and Make (Indian)’ with ‘Buy’ component being kept nil.

The development holds significance since the Army is keen to replace around 8 lakh INSAS Rifles which are produced by the Ordnance Factory Board. The RFI being issued is for 6,50,000 new assault rifles which will become the front-line personal weapon system of the important infantry soldier of the Indian Army. Infantry takes on the enemy from the front.
It was earlier reported that the Indian Army is eyeing the Kalashnikov AK-103 7.62×51 mm assault rifles for its soldiers.

According to Russian news portal SputnikNews.com, senior officials of the MoD along with a team of Ordnance Factory Board (OFB) officials had visited Moscow in April and the Kalashnikov Rifle Works at Izhevsk to discuss fast-tracking the government to government agreement for the licensed production of the upgraded Kalashnikov AK-103 7.62x51mm assault rifles in India.

The Army has around 400 units of infantry serving in the most difficult parts. Similarly, several units of the Rashtriya Rifles are also currently engaged in the counter-terrorism operations in the state of Jammu and Kashmir. In order to fulfil the requirement for Assault Rifles, 72,400 units of such rifles are being procured through the ‘Fast Track Procedure’ from the international market. The Army had recently sent a nine-member team, led by a Brigadier, to five other countries in order to select the best available from the options in those countries. The delegation is back and it is expected to start the process of fast-track procurement soon. The Request for Proposal for the larger procurement is expected to take place by December this year