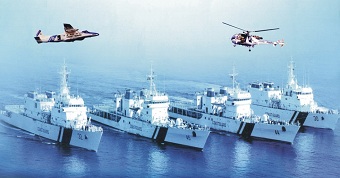 Against the backdrop of a committee of top police officials suggesting that the Indian Coast Guard (ICG) be brought under the home ministry, senior government officials said the proposal from the North Block has already been once rejected by the defence ministry which controls the coastal security agency.

“The home ministry had sent a letter to the defence ministry in 2016 demanding the Coast Guard be brought under it rather than being under the defence ministry, for better coordination with the marine and coastal police of state governments but the defence ministry had plainly rejected the proposal at that time,” a senior government official said.
The defence ministry at that that time had suggested that as the fourth armed force of the country, the coast guard was engaged in several other operations, including the protection and guarding of Exclusive Economic Zone, preventing the use of sea routes by terrorists to carry out terror attacks, searching and boarding of suspected vessels in the sea and pollution control operations in and around the country’s sea boundaries.

The defence ministry had also cited the need for a better coordination between the Navy and the Coast Guard under it for coastal security as a reason for not accepting the proposal from the home ministry. Sources said as the fourth armed force, the Coast Guard has been performing diplomatic roles for the country as it engages with global coast guards and plays an important role in defence ties with countries such as Japan and South Korea.

The force has also been playing an important role in checking the use of sea for smuggling of narcotics and use of the sea route by terrorists on the Pakistan border as it recently caught a haul of drugs worth over Rs. 3,500 crore off the Gujarat coast and prevented a suspected terror boat from entering Indian waters. Reports suggested that the home ministry is examining a report it got from the panel of Directors General of Police (DGPs) last year advocating reform in maritime security.