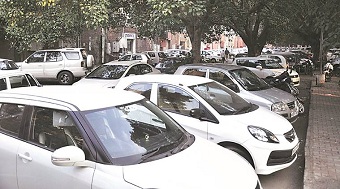 The much-delayed parking policy is once again staring at uncertainty as the file pertaining to it has been sent back to the law department over the question of whether the AAP government or Lt Governor Anil Baijal will notify it. The South Delhi Municipal Corporation (SDMC), preparing the Parking Area Management Plan for the city, said the policy should have covered 10-15% of Delhi by now, but the delay has come as a setback as groundwork for its rollout is losing steam.

Sources in the transport department said the file was sent back, “through the minister” to the law department, seeking opinion on whether the policy should be notified in the name of the L-G or Transport Minister Kailash Gahlot. Gahlot, who had forwarded the file to Transport Commissioner Varsha Joshi last month, has made it clear that since transport or parking do not fall under reserved subjects, the file need not travel to Baijal. When contacted, Gahlot said he was “not aware” of the latest development. Joshi did not comment.

The parking policy, a draft of which was released by L-G Baijal on January 29, was to be notified after completion of the public feedback deadline of 30 days. The SDMC is the nodal agency to prepare the area-level parking management plans that will come into force once the policy is notified. Deputy Commissioner of SDMC’s Remunerative Project Cell, Prem Shankar Jha, said the parking policy seeks to discourage long-term parking, encourage people to use public transport and also link parking rates to levels of pollution. However, MCDs don’t plan to make parking chargeable in residential areas, he said.

As a pilot, markings have been done in East of Kailash, Lajpat Nagar and Bhikaji Cama Place. Informally, other areas were also being covered. “But the delay in notifying the policy is resulting in people associated with the work losing interest,” said Jha. He added that the new parking rates have not been finalised yet, but “to discourage long-term parking, rates will increase considerably for parking of three hours or more”. Delhi has around one crore registered vehicles, but the parking lots of South MCD and North MCD can accommodate 25,000 cars each. The parking lots of East DMC have space for around 17,000 cars.