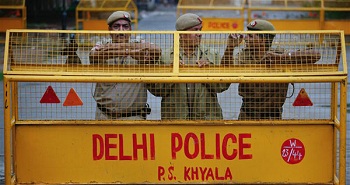 Police all over the world use barricades as an effective tool to thwart crimes, block protesters or reconfigure traffic on streets. As part of counter-terrorism measures, Delhi Police personnel check buses and other vehicles regularly by placing barricades on roads at strategic places. However, at a time when the national Capital is on high alert following the India’s recent surgical strikes in Pakistan-occupied Kashmir, sources said there is acute shortage of 6000 steel barricades in the Delhi Police.

The Delhi Police, which manages over 1,000 demonstrations near Parliament House and other places in a year, requires 6,000 more barricades. The process for procurement of 6,000 steel barricades was initiated five years ago. However, senior police officers who are supposed to take a call on the design of barricades could not reach a decision. It is learnt that senior police officers have been regularly attending presentations by private manufacturing companies on new designs of barricades. But they are yet to take a final call on the matter. As a result, police personnel on ground duty, who have been seeking barricades for the past several years, are forced to use old and less effective means to barricade.

According to police officials, there are about 5,000 barricades with the force. The maximum number of barricades is used in Lutyens’ Delhi and North Delhi to manage vehicular movement of VIPs and for handling protests and demonstrations.
In its report to the Parliamentary Standing Committee on Home Affairs headed by P Bhattacharya, the Delhi Police had said one of the measures taken to counter terror attacks is that the local police check buses and other vehicles regularly by placing barricades on the road at selected places.

Shortage of barricades at police station level can compromise the anti-terror precautionary measures in the national Capital, which is vulnerable to such attacks being a national Capital of the country, said the sources. At a high-level meeting, Delhi Police Commissioner Alok Kumar Verma has even pointed out that the cases of snatching have shown an increase by over three per cent as compared to the last year and directed all the Deputy Commissioners of Police to strategically place barricades to stop street crimes.

Quoting minutes of the meeting, a senior officer said, “The Police chief has directed that sincere efforts need to be taken by all district deputy commissioners of police especially New Delhi, North East, Central and North District for not only working out cases of snatching but also for adopting preventive measures by identifying snatching prone areas. Position of police pickets and barricades should be changed frequently based on analysis of crime trend.”