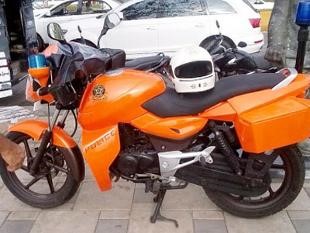 Delhi Police has launched 30 GPS-fitted motorcycles for effective patrolling under an Internet-based monitoring system in North Delhi to curb street crime like snatching and robbery. The fleet was flagged off by Joint Commissioner (Central) Sandeep Goel at Civil Lines. The new motorcycles are fitted with a GPS device which will be linked via software to a secure Internet portal which will enable supervisory officers from SHO and above to monitor each bike’s movement. “One has to open the portal and after entering a password see where the patrolling bikes are. Each bike is assigned a fix area, with a new concept ‘Geo-fencing’ whereby any bike going out of its pre-determined patrolling area will automatically make the GPS device send an SMS to SHO and ACP and they can inquire where and what the patrolling bike is doing,” said Deputy Commissioner (North), Madhur Verma.

This system has already been implemented successfully in North-East and East districts. It was observed that in areas with dense population and numerous small by-lanes snatching, robbery and other street crime happen during early morning or late evening hours. A thorough analysis of such street crimes was carried out and profiles of arrested snatchers were scientifically studied. It was discovered that these snatchers carry out a proper watch in the area before operations. They wait with patience for their victims in many cases even for hours. Hence it became clear that if patrolling is carried out scientifically and sincerely these snatchers who mostly are on bikes will not stand a chance to carry out their designs, following which the GPS-based motorcycle patrolling-monitoring system came into being, said Verma.