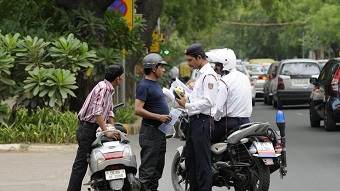 In the wake of increasing attacks on traffic policemen, the Delhi Police has decided to arm them with handguns for their protection. With a total registered vehicle population of over 10 million and over 31,000km of road network, traffic policemen in Delhi are prone to attacks by rule violators and criminals. Delhi Police Commissioner Amulya Patnaik made this announcement in an interaction with traffic police officers recently. During the meeting, he said, some officers posted at vulnerable stretches in the city will now be given a 9mm pistol.

In the past, several traffic policemen have been attacked in the city while trying to stop motorists. The demand to arm them has been a long pending one. In the past too, announcements have been made but this time a clear time-frame has been mentioned, said Delhi Police spokesperson and Special CP (Traffic) Dependra Pathak. “It was decided that all lower subordinate officers on the road — from the rank of assistant sub-inspector and above — would be given 9mm pistols, which their colleagues (on security duty) use,” said Pathak.

The meeting was attended by over 3,000 traffic policemen, who shared their experiences and challenges with Patnaik. The police chief also assured them that the stocks of anti-pollution masks, which have been provided to them, will be replenished from time to time. Pathak said he has asked the traffic policemen to maintain a professional conduct and try to preemptively address traffic problems. He added that the department would now rely on field officers to provide solutions for traffic management and in the coming years, their appraisals would also depend on the innovative solutions they propose. “We have also asked them to work on their public dealings and the overall behavioural aspects. It is important to look and project yourself as a professional, smart and businesslike, by your posturing while on duty,” he said