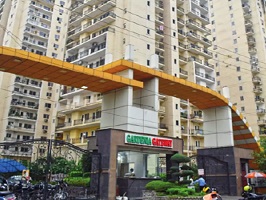 The fire which broke out in the Gardenia Golf City in Noida’s Sector 75 recently has sparked panic among residents, who are now demanding that a fire safety audit be conducted in all the housing complexes in Noida to check if the residential towers have the necessary apparatus to douse a fire. Residents alleged most of the residential towers are yet to obtain fire safety clearances and that the government is doing little to address the issue.

According to sources, at least 50,000 housing units in at least 50 newly built towers of different residential societies are occupied without the occupancy certificate issued by the Noida authority. This means at least 50 newly built residential towers are yet to put in place the necessary apparatus for controlling fires, which is mandatory if one has to obtain the occupancy certificate (OC). Many old residential towers also lack the requisite safety systems, said apartment owners.

“We have learnt that many old and new buildings, such as Golf City in Sector 75, do not have the fire safety systems in place, thus putting people’s lives at risk. We demand a fire safety audit without any further delay; our previous request also failed to yield results,” said Rajiva Singh, president of Noida Federation of Apartment Owners Association (NFAOA), an umbrella body of all AOAs in Noida.

The Noida authority said it will look into the issue and take action immediately. “We do not issue OC without fire safety clearances…The authority will carry out the fire safety audit as and when we receive the applications from the apartment owners or residents,” said Avinash Tripathi, officer on special duty, Noida authority