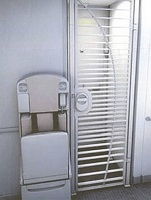 The Federation of Indian Pilots (FIP), a body which comprises more than 5,000 members most of whom are airline pilots, has written a letter to the Director General of Civil Aviation, calling the Indian regulator to make it mandatory for the installation of secondary flight deck barriers in all Indian-registered aircraft used in airline operations.

A secondary flight deck barrier is a lightweight device that is easy to deploy and stow and is installed between the passenger cabin and the cockpit door. After the tragic events of 9/11, all aircraft used in passenger airline operations have reinforced cockpit entry doors installed. These doors are designed to reduce the vulnerability of another 9/11-type of attack.

Capt. Surinder Mehta, president of the FIP, said the entire approach to aviation security had undergone a paradigm shift the world over after 9/11 and that a secondary flight deck barrier would block access to the flight deck whenever the reinforced door is opened in flight during rest breaks, serving of meals, and so on.

The FIP letter states: “The use of current inflight practices, i.e., reliance on a reinforced flight deck door and supplementary crew procedures, does not provide a complete solution for securing the flight deck and makes the cabin crew extremely vulnerable. In addition, secondary barriers provide a secure buffer area before the cockpit door that gives the crew an opportunity to visually assess a perceived threat and reveal a perpetrator’s hostile intent to crew members and sky marshals which would afford them the benefit of critical extra seconds to react.”

Calling for relook at the heightened security threats facing the national airline industry given the consistent rise of disruptive passenger incidents and the recent geopolitical developments in the Afghanistan-Pakistan region, Mehta explained that the installation of secondary flight deck barriers was cost-effective since “the benefit of the measure far outweighed the cost of providing enhanced security…. In addition, from a security resource and commercial standpoint, secondary barriers may also reduce the requirement of sky marshals on many sectors thereby enabling the government to conserve and redeploy such security personnel for more critical sectors whilst enabling the aviation industry to release more revenue seats for sale over a long term.”