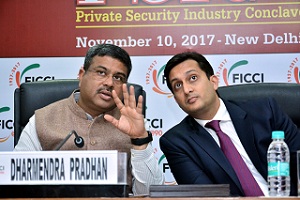 A FICCI-PwC report, titled ‘Indian private security industry: Preparing for the next leap’ was released by Shri Dharmendra Pradhan, Minister of Skill Development and Entrepreneurship, Government of India, at the fifth edition of FICCI’s Private Security Industry Conclave 2017. The report presents an in-depth analysis of the Indian private security industry, covering its major service segments, key players, existing policy frameworks, a comparison with global policies and amendments needed to the existing reforms and lists real challenges for the industry players going forward.
The report notes that as per industry sources, 60 percent of the security service providers still operate as unorganised, thereby keeping the sector pricing oriented and amenable to unfriendly employment practices and making it difficult to monitor quality and compliance. The sector continues to be perceived by the workforce as non-aspirational, as people are unaware of career prospects and the benefits that can be achieved. Technology integration is yet another challenge as it is widening the gap between the well-established players and smaller players in the industry.

Mr. Dharmendra Pradhan, urged the private sector to consider Recognition of Prior Learning (RPL) where without any financial implication private security workforce would be skilled and upskilled and provided certification. Addressing a Special Session on ‘Critical issues concerning Skilling and Training of Security Workers’, Mr. Pradhan said that there is a huge policy gap between private security industry and skill development, which needs attention. He called upon the industry representatives to engage in meaningful deliberations with his ministry to develop a mechanism to skill and certify the workforce in this sector. He added that such an initiative would be a positive move for India’s ease of doing business ranking by the World Bank.
On the occasion when the FICCI-PwC Report on Private Security Industry was released by the minister, Mr. Rituraj Sinha, Co-Chair, FICCI Committee on Private Security Industry and Group COO, SIS India Ltd., said that the private security industry is estimated to be worth ~INR 40,000 crore in terms of revenue with per annum growth of 18-20 per cent. The sector offers great employment opportunities as every year new jobs are being created here. He added that the categorization of private security workers as skilled and highly skilled has benefitted the industry.