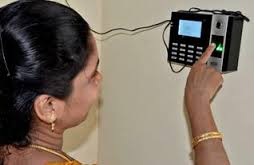 The Narendra Modi government will phase out the manual system of attendance in all central government offices over the next couple of months, and replace it with an Aadhaar-enabled biometric attendance system (AEBAS). The AEBAS, which will also cover attached and subordinate offices of the central government, will be installed across establishments in the capital by December 31 and in other places by January 26 next year, the department of personnel and training said.

According to a DoPT note circulated to all ministries and departments, the biometric attendance will only be an enabling platform with no change in rules regarding office hours, late attendance etc. The note makes it clear that leaving office early will be treated on par with late attendance, and entail debiting of half a day’s casual leave for each day of early leaving and disciplinary action in case the government servant is found habitually logging out early from work.

As per the late attendance rules revised last in 1982, half a day’s casual leave should be debited for each day of late attendance, though late attendance up to an hour may be condoned by the competent authority, if it’s not more than twice in a month and for justifiable reasons. However, disciplinary action must be taken against government employees who are habitually late for work.