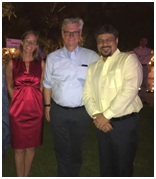 Recently the Ambassador of the Kingdom of Denmark, Peter Taksoe-Jensen, hosted an evening of festivities which was supported by G4S, to celebrate the Constitution day of Denmark in New Delhi. The event was attended by British High Commissioner to India; Sir Dominic Asquith, Swedish Ambassador; Harald Sandberg, European Union Ambassador; Tomasz Kozlowski and CEOs of Danish companies. Mr. Rajeev Sharma, MD, G4S said, “We at G4S take great pride in connecting with the Constitution Day celebrations of Denmark. I would like to take this opportunity on behalf of G4S to wish the Ambassador of the Kingdom of Denmark a long and meaningful association with India.”

“Our Group, G4S, has its origins in Denmark. In fact, G4S has a secondary stock exchange listing in Copenhagen. We have had a long and meaningful association with the country and we look forward for a more mutual and beneficial association between the two countries,” said Rupan Sidhu, Director- Corporate Affairs, G4S

Peter Taksoe-Jensen, the Danish Ambassador to India and host of the evening welcomed guests on the occasion. He said “It’s a great pleasure to be in India. It has a great potential to grow due to its dynamic culture.” The Ambassador also thanked G4S for its support.

The day is observed to honor the anniversary of the signing of the Danish constitution of 1849 by Frederik the IV. Known to Danes as ‘Grundlovsdag’, or Independence Day, it marks the establishment of Denmark as a constitutional power.