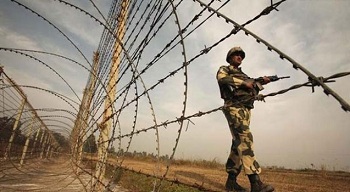 The Indian government is pumping around Rs 1,000 crore in a multi-layered security infrastructure to plug cross-border infiltration on the western front. Not just on land but under water, too. An indigenous sensor technology that can detect infiltrators under water will be part of an anti-infiltration technical grid that will also include laser walls, ground sensors and thermal imagers at various riverine gaps on the border in Jammu and Punjab, according to Home Ministry officials.

The move is expected to complement extensive repair work the government is undertaking of fences on the Punjab border, and assumes significance following the Uri attack on September 18, believed to have been committed by four terrorists who crossed over from Pakistan. As India strengthens its fences and other terrestrial defences, the security establishment believes that underwater infiltration is a clear possibility, said an official. He said that training on water, including swimming in swift rivers and diving, is part of the Lashkar-e-Taiba (LeT) training module and that divers could be used to infiltrate in future.

The BSF facility is also working on replacing laser technology with infra-red rays with enhanced capabilities. “Laser rays are visible, infra-red provides a stealth option,” said an official. “At the moment, they (infra-red rays) are able to cover gaps of only about 100m. The BSF is working on increasing it to 500-700m so that areas where rivers stretch to more than half-a-kilometre can be secured,” said the official.

The ministry has also sanctioned repair-work on fences and floodlights, which came up in the 1980s on the Punjab border, the official said. “The repair of about 250 km of the 550 km of border-fencing has been sanctioned. The quality of material chosen for fencing is also better. The existing fencing is made of wrought iron, which is prone to rusting. The new fencing would be of galvanised metal,” said the official.