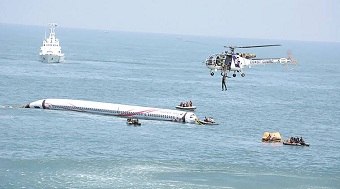 The government has conducted security audits of 227 non-major seaports to ensure their foolproof security and foil possible attempts by terrorists to use them as launch pads to carry out 26/11 Mumbai attacks-type escapade, officials said. As India observes the 9th anniversary of the country’s worst terror attacks, a home ministry official said a number of steps have been taken since the tragedy to strengthen the coastal security and that includes monitoring of suspicious vessels and boats by ISRO satellite imageries.

Security audits of 227 non-major seaports and single-point moorings have been completed and as per the recommendations of the experts, vulnerabilities of these harbours were plugged, the official said. Standard operating procedures (SOPs) were developed for dealing with the breach of International Maritime Boundary Line and SOPs were issued for upgrading security in the 227 non-major ports and single point mooring facilities.
Strengthening of security in 12 major seaports in the country–Kandla, Mumbai, Jawaharlal Nehru port, Mormugao, New Mangalore, Cochin, V O Chidambaranar, Chennai, Kamarajar, Paradip, Visakhapatnam and Kolkata-Haldia–has already been completed where additional security protocols were implemented.

According to official statistics, around 95 per cent of India’s trading by volume and 70 percent by value is done through maritime transport. In 2015, the total traffic was recorded at 1,052 million metric tonnes (MMT) and it is expected to reach 1,758 MMT by this year-end.

As part of the tightening of coastal security, the Indian Space Research Organisation will monitor boats and vessels through satellite imageries and provide 1,000 transponders by March next year to observe the movements of boats under 20 meters.