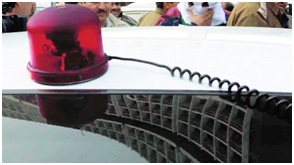 The Union Cabinet has decided to ban the use of red beacons atop vehicles of dignitaries and government officials, including the Prime Minister and the President. The move means beacons — the blue flasher — will be allowed only on vehicles belonging to the fire service, police, army and ambulances, to ensure passage through traffic. “In a historic decision, the Cabinet has decided that beacon lights will be removed from all vehicles, barring emergency services vehicles, from May 1,” Road Transport and Highways Minister Nitin Gadkari said.

The decision to ban the beacons, taken at the meeting chaired by PM Narendra Modi, will extend to the vice-president, the chief justice of India, Union ministers, chief ministers, state cabinet ministers, bureaucrats and judges of the High Court and Supreme Court. The move comes a month after Chief Ministers of Uttar Pradesh and Punjab – Yogi Adityanath and Amarinder Singh – decided against the use of the red beacon on their official cars.

In 2013, the Supreme Court dubbed the use of beacons by ministers and government officials “ridiculous and synonymous with power” and said they should be removed immediately. The following year, the top court again described beacons as a “status symbol” and added that instead of constitutional functionaries, it was the “ambulances, fire services, police and army who are in need of red lights. Rest can be excluded and there is no need for our orders”.