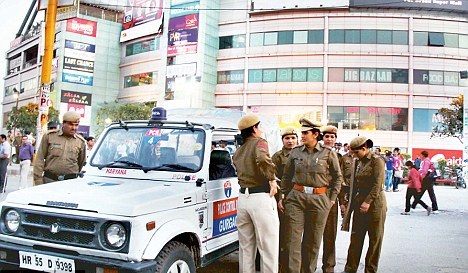 The booming metropolis that is Gurgaon suffers a serious manpower crunch when it comes to policing. With a population of over 2 million, the city only has 4,080 cops. The rules state there should be one policeman for every 400 residents. In Gurgaon, there is one policeman for every 500. The ratio goes down further when special duties are assigned, something that happens here frequently. Recent events like security for Republic Day, riots in Udyog Vihar and protests at the release of the film ‘MSG: The Messenger’, stretch the already overburdened police force thin.

Compared to Delhi, which has a police force of 85,000 for an area of 1,484 sq km, Gurgaon’s 4,080 cops cover 1,253 sq km.  The last appointments made by the Haryana Recruitment Board — responsible for police hiring — were in 2013, when only constables were hired. Despite frequent transfers, no new additions have been made since then. From the time vacancies are announced till the end of their training, it takes about two years for new recruits to be inducted into the force.

The 23% manpower shortage has forced the police force to postpone many of its plans to enforce better law and order.  “We want to implement the beat system, but can’t do so as we don’t have sufficient manpower to deploy the minimum one policeman per village. Similarly, despite regular traffic jams, we don’t have enough personnel to manage traffic. It is extremely difficult, but we’re somehow managing with our current strength,” said ACP (crime) Rajesh Kumar.

Cops also tend to face burnout as the city’s rapidly growing population is dependent on its few law enforcers. Most complain of long working hours taking a toll and paucity of leaves that do not allow them to visit their home towns for a long stretch.
Private security is often hired to augment the existing police force, as on Republic Day, when security was required for the four malls on MG Road and offices in Udyog Vihar. It is also common for policemen to seek help from NGO volunteers and private security personnel to help manage traffic during peak hours.