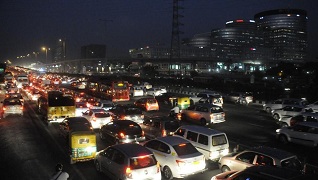 Gurugram is set to get a 1,000-strong night constabulary dedicated to patrolling the streets in order to shore up law-and-order in the city and particularly to make women feel safer, according to top government officials and police officers. They will be called Special Police Officers (SPOs) and will not work on a shift system, like the normal constabulary, but will be deployed only at nights in a city where a number of offices are open late because of a thriving BPO industry and MNCs who follow American and European time zones.

“We are recruiting 1,000 constables only for night duty in Gurugram,” Haryana Chief Minister Manohar Lal Khattar said, adding that people were scared of going out at night in the city in the past, but no longer. The recruitment of the night constabulary was confirmed by Gurugram Police Commissioner Sandeep Khirwar, who said that a third of them had already been recruited. “We have already recruited 374 special police officers specifically to enhance night patrolling. They will be focusing only on that,” Khirwar said.

“Gurugram police has also been provided additional constabulary of about 1,079 fresh recruits. They will be deployed on patrolling and traffic duties. Some of the recruits have good Informational Technology skills, and their services will be utilised in cyber cells and tcyber police station. With the large presence on the ground, police responses will be more prompt and effective,” he added. Night deployment will be more in the eastern side of the Gurugram — particularly Golf Course Road, Sector 29, MG Road, Sohna Road and Cyber City – which sees the maximum vehicular movement, the police commissioner said.

The chief minister said the government had done away with the cumbersome recruitment process to speed up hiring of police personnel. “A batch of 4,500 constables was cleared a few days go. About 1400 of them are joining Gurugram. The police force in the city is not adequate but preparing and inducting new recruits takes time… . We have done away with the interview system, which consumes time. Whoever clears the exam will make it to the list,” the chief minister said.