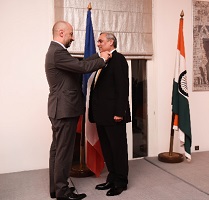 France’s highest civilian award, the Legion of Honour, has been received by Mr. Anil Chaudhry, MD & Country President, Schneider Electric India. This award is given in recognition of outstanding contributions to French society over the course of a minimum of 20 years of one’s professional career. This is an outstanding public recognition of the accomplishments of a civilian.

The award was conferred upon Mr Chaudhry by Ambassador of France to India, H.E. Mr François Richier, during a ceremony held on Monday, April 18.

The distinguished award, Chevalier de la Légion d’Honneur (Knight of the Legion of Honour), was presented to Mr. Anil Chaudhry for his significant and commendable contribution towards strengthening Indo-French relations through his association with French organizations since the beginning of his career. Working for over three decades for French business interests in India and in the world, Mr. Chaudhry has created a significant body of work in the field of infrastructural development, climate change, Indo-French economic relations, access to energy and skill development.

Receiving the award Mr. Anil Chaudhry, MD & Country President, Schneider Electric India said, “It is with great honor that I receive this profound recognition given to me by the French Embassy today. The distinguished history of this award, and its long list of eminent awardees, leave me humbled and tremendously inspired to live up to the noble principles this award represents.”

Presenting the award, Ambassador François Richier said, “I am truly delighted to bestow this award on Mr Anil Chaudhry, whose remarkable acumen and vision has contributed significantly to boosting French business in India in areas essential for a country’s economic development. As the helmsman of Schneider, he has long been promoting “Make in India” and skill development – two major initiatives outlined by the Indian government – thus forging enduring ties between France and India.”