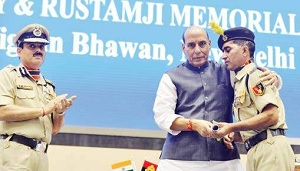 Union Home Minister Rajnath Singh has directed officers and jawans of central paramilitary forces not to share videos on social media. Speaking at a Border Security Force (BSF) investiture ceremony, Rajnath Singh asked security personnel to be aware of attempts by the “enemy” to spread false information on social networking applications like WhatsApp and Facebook. “It is seen that personnel and officers use and put such information or videos on their Facebook pages or on WhatsApp. You should not forward such items, unless it is authentic and in the interests of the country,” Singh said.

The home minister said the government was working to fully deploy a Comprehensive and Integrated Border Management System (CIBMS) to protect India’s borders using radar, laser, camera and other command and control devices. Irked by some paramilitary personnel not wearing their uniforms properly, Singh pointed out in his speech out that some personnel were not wearing caps. The minister said he noticed only a handful of those in uniform were donning their caps when everyone was standing in respect of the BSF song that was being played, just before he awarded gallantry and service medals to the Border Security Force personnel.

Later, after the medal ceremony got over, Singh also interrupted a BSF officer who in his vote of thanks speech said it was “kind” of the minister to have graced the event. It is not kindness but it is my duty to come here, the minister said. At an event of the Civil Services Day in April this year, Singh had similarly pulled up the babus and directed them to be punctual after the event got delayed by a few minutes.