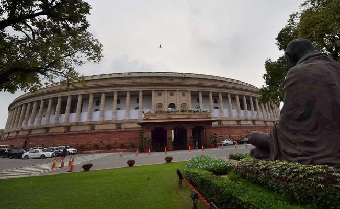 The home ministry has released Rs. 9.21 crore for comprehensive maintenance of the integrated security system at the Parliament Estate, an official said. The amount, released recently, will be spent on annual maintenance of the security apparatus at the Parliament complex, including CCTV cameras, access control, personal and baggage screening system, vehicle scanning system and explosive detectors, a home ministry official said.

Parliament was the target of a terror attack on December 13, 2001, when five armed terrorists carrying forged passes drove into the complex in a vehicle. The terrorists, all of whom were linked to the Jaish-e-Mohammed, were engaged by the security personnel and killed. Eight personnel and a gardener also died in the encounter.

The attack resulted in a major security upgrade in the Parliament building, with central forces being deployed in good strength outside the complex and nearly Rs. 100 crore spent on installation of hi-tech gadgets like boom barriers and tyre busters. The CRPF, the Delhi Police and Parliament’s own security staff are currently deployed to guard the complex. The entire Parliament house complex is enclosed by an ornamental red sandstone wall or iron grills with iron gates that can be closed when the occasion demands