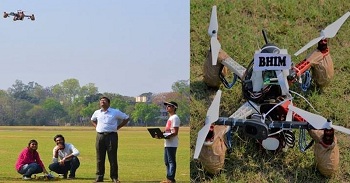 A research group at IIT Kharagpur has designed the country’s first indigenous superpower drone and named it after the second Pandava. It’s just under a metre in length, but its uniqueness lies in the unmanned aerial device’s state-of-the-art protection shield, superior imagery and hitherto unknown abilities, say its creators. BHIM can create a Wi-Fi zone within a nearly 1-km radius when it flies overhead. Aimed for conflict zones, the drone -which has a battery backup of seven hours -can fly into a disaster (or war) zone and create a seamless communication network for security forces, rescue personnel and even the common man.

The real edge of BHIM lies in its ability to maintain long flight times and drop emergency supplies by using parachutes. It can also be used for rescue operations in remote and hard-to-access areas. The drone can conduct integrity checks for boundary walls and find out breaches, if any. Designed especially for emergency situations, the automated drone has an actual vision-based guidance with built-in intelligence that helps it identify if an area is crowded or not. It will then fly away and land in a safer place.

“Such advanced built-in intelligence is not available in drones now. The design is completely in-house. The controlling and guiding algorithms of the drone have been developed in our lab,” said Sudip Mishra, a faculty member of the computer science and engineering department, who led the research along with another faculty member, N S Raghuvanshi, and research scholars Anandarup Mukherjee and Arijit Roy.

Researchers at IIT-Kharagpur took care to keep the drone lightweight, but with a strong body, made of off-the-shelf indigenous components. This ensures that it costs just one-fourth the price of any average drone used for surveillance in India now.The drone was shown to Defence Research and Development Organisation when a team visited the institute to inspect network security solutions that IIT-Kharagpur had developed.