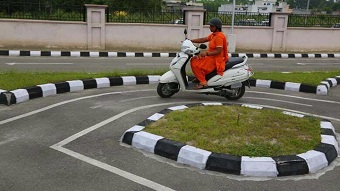 Reversing in S-shaped tracks, driving uphill and swerving your car at bends shaped like an 8 — all this while being monitored and marked by sensor-based CCTV cameras. Driving tests in Delhi are getting tough and automated. From June 2018, every applicant for a driving licence in Delhi will have to take the new gruelling driving skill test at 10 automated test centres coming up in different parts of the city. The high-tech test tracks will have tougher conditions which aspirants will have to fulfil before they can hope to get a permanent driving licence.

The test has been designed to ensure only qualified drivers get licences, which would help reduce the number of accidents on Delhi’s roads due to reckless driving. At least 100,00 people have died in road accidents across the city in the last six years. But it is unclear how many of the deaths are related to rash driving. A senior government official said four automated centres will come up at Delhi Transport Corporation’s existing terminals in Hauz Khaz, Shakur Basti, Raja Garden and Hari Nagar. Three others are being built on the transport department’s land in Rohini, Dwarka and Jharoda Kalan. The rest will be in Burari, Sarai Kale Khan and Loni Road.

Once ready, the existing 13 transport offices will be dissolved and the new 10 centres will be the local regional transport offices (RTO). At least 1,600 driving licences are issued in Delhi every day. Presently, the driving test is conducted on the road with usual traffic, where an applicant has to drive straight for less than a kilometre. An officer of the rank of licensing inspector manually marks the aspirant Unlike now, where passing the test is completely on the discretion of the licensing officer, the new system will have no human intervention. The only task of the licensing officer will be to oversee the test, take a print-out of the result and sign it.

Calling the existing test pattern “haphazard”, the minister said at present, most of the driving tests are being conducted on the roads. “The current system is lax and even non-skilled people are getting away with a DL, which results in irresponsible driving. It is not only dangerous, but also gives a very unpleasant environment to the applicant,” Gahlot said. Two-wheeler riders will have to prove riding skills in a ‘serpentine’ track. Those who are able to ride on the track without deviating from the marked lines and within a stipulated time will ‘pass’ the test.