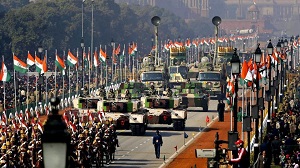 India has announced an extensive restructuring of its army, an exercise that will see 57,000 soldiers being re-deployed in combat roles to sharpen the force’s fighting edge. Announcing the government’s decision to usher in the much-needed reforms, defence minister Arun Jaitley told media after a cabinet meeting the “far-reaching” revamp was aimed at improving army’s tooth-to-tail ratio — the number of personnel (tail) required to support a combat soldier (tooth). “Implementation has begun with the decision of the cabinet committee on security to close 39 military farms in a time bound manner,” a defence ministry spokesperson said.

The restructuring would be completed by December 2019. The army has around 40,525 officers and 1.15 million other ranks. The defence ministry dubbed the overhaul the first such exercise in Independent India’s military history. The restructuring effort will involve the shutting down of all military farms and army postal units in peace stations and a revamp of different wings including logistics, communications establishments, repair facilities, ordnance depots and other administrative and support areas.

The exercise follows recommendations made by an 11-member expert panel, headed by Lieutenant General DB Shekatkar (Retd), on enhancing the army’s combat potential and trimming its revenue expenditure. The committee had listed out measures to bring down the budget for meeting day-to-day expenses and making more money available for weapons and equipment. The ministry is implementing the first batch of 65 of the 99 Shekatkar panel recommendations approved by the government. The remaining 34 relate to the air force, navy and some tri-service issues. The suggestions are being implemented nine months after the committee submitted its report.