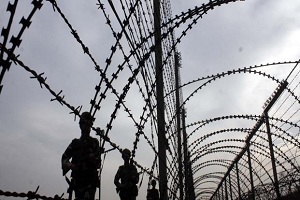 The BSF is implementing an ambitious project called the comprehensive integrated border management system (CIBMS) as part of the Narendra Modi government’s plan to completely seal the Indo-Pak and India-Bangladesh borders in the next few years. The BSF is tasked with guarding the over 6,300-km-long two borders and its chief, in an interview to PTI, said the new frontier guarding systems will bring a “sea change”, for the first time, in this domain. “There is going to be a paradigm shift in our operational preparedness. As of now, we patrol from point-A to point-B (along the border). What we are now planning is to shift to a QRT (quick reaction team)-based system and a number of new technologies which have not been tried so far are being tested,” said K K Sharma, the director general of the 2.65-lakh personnel strong force.

Sharma, a 1982-batch IPS officer, explained how the new border guarding mechanism, first along the “volatile” Pakistan border and then at the Indo-Bangla frontier, will work. “The new equipment and technologies will be integrated and a feed, from CCTV cameras, will go to the border out post where there is a monitor installed. “This will be monitored round-the-clock by two or three men. Now, we have softwares which are in a position to detect any intrusion or any change in the scenario and create an alarm,” the DG said. An automatic alarm will indicate the exact place where this intrusion (at the border) is taking place or an attempt is being made or something is being seen, he said.

“Once we get the alarm, we will zoom our night vision cameras on that and when we come to know what is happening, we will be able to neutralise the threat. This is the idea,” Sharma said. The BSF, raised in 1965 for border guarding roles, is running two pilot projects of 5-km each in Jammu in this context and this, the BSF boss said, will subsequently be set up at four more porous patches: One each along the Indo-Pak IB in Punjab and Gujarat and one each at Tripura, West Bengal and Dhubri (Assam) along the Indo-Bangla border.

The DG said the new system will see that instead of his troops patrolling day-in-and-day-out along the border, they will be sitting in the border outpost ready to move if there is any threat. “This will be a sea change. We have leap frogged in terms of gaining technology. From the patrolling mode to the QRT mode. This is the CIBMS. This is a paradigm shift in what we are going to do now,” he said, adding however, the patrolling will not be totally done away with.