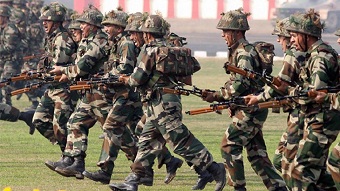 Indian Army personnel may soon be seen in an all-new uniform with the Defence Ministry reportedly mulling the prospect of customising the wearable gear based on weather conditions in different parts of the country. The current uniform has terrycot fibre as its main component and this is not best suited for hot and humid conditions. These had replaced the cotton uniforms in use because the Indian Army had said cotton uniforms are not easy to maintain.

Now, a change in uniform is likely to take all these factors into consideration as well as meet with the changing nature of contemporary warfare. In addition to the change in uniform, it has been learnt that a change in how the service stripes are displayed is also being looked into. Currently, the stripes – denoting rank – are placed on the shoulders but these may be moved to where the front buttons are on the uniform. Several armies around the world display the service stripes in this manner.

In addition to these changes, belts worn on the outside of uniforms may be moved to the inside to make the soldier more comfortable and appear smarter. Also, the colour of the shirt and the trousers may be different in the changed uniform. Sources say that uniforms of different armies around the world are being studied – not just for appearance but also for their utility and practicality.

The uniform of the Indian Army has been changed thrice previously. The first change had taken place in the post-independence years to differentiate the Indian Army from Pakistani Army. The Pakistani Army continues to make use of Khaki uniforms. The second change in the uniform of the Indian Army took place in 1980 to what is called ‘Disruptive Pattern (DP) battle dress.’ This was done because the prevalent uniforms at the time were not as effective when personnel were trying to blend in with the terrain. The DP battle dress, however, was made of polyester fabric and was not the most comfortable in hot and humid conditions. In 2005, changes were made to the DP battle dress, also to differentiate the Indian Army from the uniforms of BSF and CRPF