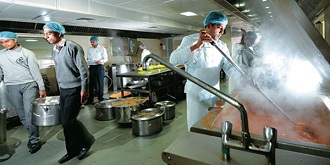 In July last year, a Comptroller and Auditor General audit report stated that the food served by the Indian railways was “unsuitable” for human consumption. This led the railways to co-develop a hi-tech system that will help in ensuring that food is cooked hygienically.

While the Indian railways is no stranger to criticism, it does get an ‘E’ for effort, especially for at least attempting to save face by installing Artificial Intelligence-enabled high definition CCTV cameras in 16 base kitchens that will monitor proceedings in real-time.

The system is configured to detect any action that violates basic hygiene requirements and if it does detect anything out of the ordinary, it will immediately raise a ‘red flag’. The technology has been developed in association with a New Delhi-based firm called WOBOT.
Eight high definition cameras have been installed in each of these kitchens and the feed will be sent directly to the kitchen surveillance control room set up at the IRCTC’s (Indian Railway Catering & Tourism Corporation) headquarters in Delhi. The AI-enabled cameras will be able to detect anomalies like whether the staff are wearing the required uniform or even the presence of rodents and roaches. All this information will be relayed to the central control room.

Apart from that, the system will also allow the central control room to make announcements to the base kitchens. An IRCTC official said, “To begin with, 16 base kitchens of IRCTC have been installed with high definition cameras connected to huge monitors for AI vision detection. Live streaming of 16 base kitchens will be done. Suppose a chef or any kitchen supervisor is not wearing the uniform, including the mandatory cap, the AI system will track that and automatically raise a report to the concerned contractor immediately. If the matter is not addressed within a certain time, it will further be reported to IRCTC authorities in charge.”