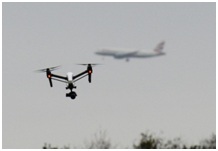 The Bureau of Civil Aviation and Security (BCAS) in February 2020 had ordered all the airport operators across the country to establish drone disabling technology. In 2019, the National Investigation Agency (NIA) in its annual conference with all the law enforcement stakeholders had discussed in detail about the threat emanating from the drones operated by anti-India forces.

In order to deal with any kind of threat, the BCAS issued elaborate guidelines for the airport authorities to put in place anti-drone technology and hand it over to the Central Industrial Security Force (CISF), which guards the airports in the country. The operators were given a maximum time period of 12 months to install the anti-drone facilities. However, around eight months have passed but not a single airport authority has come forward to implement the order.