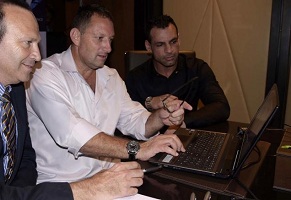 Acting on the recent bilateral agreement on homeland security between Israel and India, a cyber security company from Israel, Vital Intelligence Group, has announced that it will establish cyber security academies in the country. The firm is expected to kick off operations in Mumbai next April, following which the it will establish branches in New Delhi and Hyderabad. The academies will give defence training to the government and citizens.
Members of the company said the academies will provide training in various disciplines of cyber security that will meet the needs of “emergency management, law enforcement, disaster management and safety organisations, military and governmental agencies, private security groups.”

It plans to provide courses ranging from a diploma to a four-year specialisation in cyber security and cyber defence to private organisations and citizens. The members also said the company could provide special training to the government and its security agencies, including the military, should the Centre approach them.

Marc Kahlberg, Chief Executive Officer of the company and former Israeli Defence Force and National Police Officer, said experts from his team researched for six months on crime rates in Mumbai before planning to establish themselves here. He claims the institute can provide vital knowledge, with which security agencies can effectively investigate various crimes.

He says the experts working with the company have technological knowledge that can be used to “locate the spots where rapes and other crimes are happening, and to track down the perpetrators of the crime.” The company hopes to strike a dialogue with authorities in the government, and plans to work with the cyber cells of police and security agencies to improve the cyber security of the country.