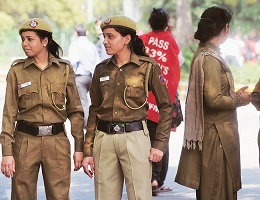 Amid a rising graph of crime against women in the country, they constitute just 7.28 per cent of the police force in India and at 2.47 percent, their presence is the lowest in Naxal-hit Telangana, according to government data. In militancy-affected Jammu and Kashmir, there are just 3.05 per cent women in a police force which has a sanctioned strength of more than 80,000 police personnel, Union home ministry statistics said.

As on January 1 last year, Telangana had just 2.47 per cent women in the rolls of its police force which has a sanctioned strength of 60,700 personnel, the data said.

In Uttar Pradesh, the country’s most-populous state, the police force has only 3.81 per cent women. It has a sanctioned strength of around 3,65,000 personnel. The percentage of women in police forces in Andhra Pradesh, Madhya Pradesh and Meghalaya was also low, the statistics showed. While Tamil Nadu has the highest number of women police personnel, the situation in Himachal Pradesh, Maharashtra and Goa was relatively better.

Among the Union territories, Chandigarh has the highest number of women personnel while the Delhi Police, with a sanctioned strength of around 85,000 personnel, had just 8.64 per cent women in its rolls as on January 1 last year.

The government data comes amid an increasing graph of crime against women in the country where overall crimes against them rose from 3,29,243 incidents in 2015 to 3,38,954 incidents in 2016.

The situation is pathetic despite the Union Home Ministry sending advisories in 2009, 2012 and 2016 to all the State Governments and Union Territories to increase the strength of women police personnel to 33 per cent, a senior ministry official said. All state and UTs have also been requested to create additional posts of women constables and sub-inspectors and fill up vacancies by recruiting them, the official said.

The home ministry has taken a number of steps for increasing the strength of women in paramilitary forces, another official said.

Women are expected to soon account for one-third of constable-rank personnel in the Central Police Reserve Force and around 15 per cent in the border guarding forces– Border Security Force (BSF), Sashastra Seema Bal (SSB) and Indo Tibetan Border Police (ITBP), he said. These forces together comprise around nine lakh personnel of whom only around 20,000 are women now.