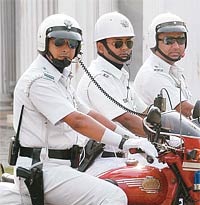 Kolkata police will soon buy some state-of-the-art surveillance devices to tackle law and order problems and terror threats. While the force has already placed orders for five live-view cameras to directly feed live footage to Lalbazar, the special task force of Kolkata police will now buy Rockcam outdoor hidden cameras, Spark Nano 4.0 GPS tracker and body heat activated DVR. All these equipment are with long time recording facility. While the Rockcam hidden camera indeed looks like a rock and can easily be passed off as an innocuous rock lying at a trouble spot, the GPS tracker fits in the palm and weighs less than 100gm.

Kolkata police are procuring these items for two major reasons — one, these are needed to keep an eye on espionage activities and two, these items will help in recording law violations that can help ascertain the violator later.

The modernization of the police force in Kolkata is part of the central government’s ambitious “Safe City” project. The ministry of home affairs wants to replicate models from New York, Washington and Boston, to have state-of-the-art ‘fusion centres’ in six Indian cities, including Kolkata, where such items will become a necessity. These fusion centres will be created to “collect, analyze and disseminate various data inputs that have a bearing on safety and security”, says a document of the home ministry.
Top-level sources said fusion centres would concentrate more on preventing and detecting a crime before it is executed rather than investigating it at a later stage.