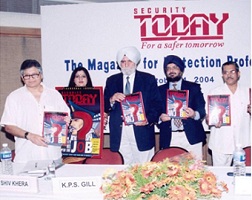 SECURITY TODAY mourns the passing away of a true Supercop and sends its sincere condolences to his family. Former DGP of Punjab KPS Gill, who is credited with wiping out militancy in the state, passed away after suffering cardiac arrest in Delhi. He was 82.  “He was suffering from end stage kidney failure and significant ischemic heart disease. Gill had been recovering from peritonitis but died of a sudden cardiac arrest caused by cardiac arrhythmia,” Dr Rana, head of the Sir Ganga Ram’s Hospital’s Department of Nephrology, said.

The IPS officer had served twice as the DGP in Punjab before retiring from the force in 1995. He was subsequently appointed the president of the Indian Hockey Federation (IHF). Dubbed “supercop” by the media for his crackdown on Khalistani terrorists, Gill was awarded the Padma Shri, India’s fourth-highest civilian honour, in 1989 for his work in the civil service. Mr Gill is especially and fondly remembered by SECURITY TODAY since he launched our magazine in 2004 and spoke of his belief that a magazine of this nature was needed in the market.