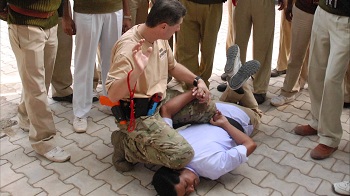 The Maharashtra Police Academy (MPA) here plans to create tailor-made courses for private players and offer lessons on security. MPA director Nawal Bajaj said there were plans to create training modules for banks and security agencies, especially considering the threat perception in Mumbai, the financial capital of the country. Bajaj said the main focus of the academy would still be to train cadets. However, with its autonomous status, the academy will now reach out to the private sector and chalk out some courses for them to generate revenue, develop infrastructure and become self-sufficient.

“This is the state’s premier training institute for newly-recruited police sub-inspectors and deputy superintendents. Private sector would like to seek courses from experts of police department and certification from the MPA, which in turn, would help increase the credibility of these private entities too,” he said. He added that there has been an increasing demand from private entities for such courses, which could not be provided till now. With the autonomy status, the institute plans to develop a number of courses in coming months for private sectors on the lines of Yashwantrao Chavan Academy of Development Administration (Yashada) and generate its own funds, he said.

Bajaj said high-security installations in Mumbai such as the diamond bourse, the stock exchange, zaveri bazaar and other parts of the state have always been on the terrorists’ radar. “Such installations along with important malls, bank headquarters, airports and power grids could be covered by developing security modules according to their needs,” he added. The organisations would be trained to take preventive measures against a range of threats, including economic offences, threat from cyber crime and terrorist attacks. Bajaj added that once these private sectors are trained, they can train the subordinates and reduce the burden on the department, while the MPA benefits by generating its own revenue and developing the necessary infrastructure.