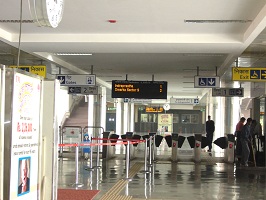 Several security features have been added at the stations on Delhi Metro’s Heritage Line. A six-foot glass wall has been installed at each station demarcating the checked and unchecked areas after studies showed several theft cases near security X-ray machines as well as people passing items through the security barriers. In addition, CCTV cameras have been placed at strategic points to ensure no one can sneak through undetected. Central Industrial Security Force (CISF) has deployed 261 personnel at these four stations with special attention on security vulnerabilities.

“The stations have been planned better in terms of their design. There is also more space between frisking points and smart card counters, and CCTV positioning has been done to ensure that no area is left undetected,” said deputy commandant Manjit Singh, CISF spokesperson. The Heritage Line stations will also have night-vision cameras.

To handle a heavy tourist footfall, CISF personnel deployed on this line have been given special training in soft and communication skills. They have been taught how to speak with an accent and trained to understand British and American accents. They will also advise the tourists on how to take extra care of their baggage in crowded areas. “These personnel will be able to guide the tourists to their destination,” said Singh.