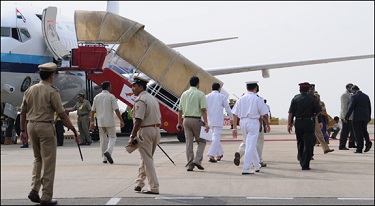 The Union Home Ministry has asked the Central Industrial Security Force (CISF) to publish the names of “egoistic” members of Parliament who are often found intimidating security staff at airports when asked to submit to checks. The CISF, which mans security at airports in the country, has also been told to upload the names on its website. The official said, the ministry, over the past few years, has been getting “false” complaints from parliamentarians cutting across party lines against CISF personnel alleging misbehaviour.

“But most such complaints turned out to be false during investigations. On the contrary, the parliamentarians had quarreled and browbeaten CISF personnel at airports when asked to undergo security checks. They (MPs) became very angry with the CISF staff for ignoring their VIP status and lodged false complaints of misbehaviour against them,” the ministry official added.

According to Bureau of Civil Aviation Security (BCAS) rules, MPs are not exempt from security checks at airports. “In most cases they flaunted their ID proof to get exemption but were not allowed by CISF personnel,” a senior CISF official said. During investigations the probe team scanned CCTV footage and found the MPs trying to browbeat the security officials. “We showed the CCTV footage to our bosses and they were convinced that it was the fault of the MPs,” the official added.

In many cases, MPs lost their cool while getting their belongings X-rayed and when asked to take off their coats before check-in.

According to figures available with the HomeMministry, 24 MPs and a few bureaucrats had lodged “false” complaints against CISF personnel in 2011. Five MPs lodged “false complaints” the next year. The number rose to 30 in 2013. “CISF staff deployed at airports has been asked to extend due courtesy to MPs and other passengers but without compromising on security norms,” a home ministry official said.