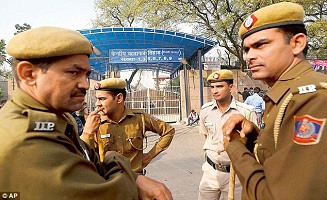 Security at Tihar Jail, Delhi, was beefed up after the Nabha jailbreak and patrolling has been intensified. Officers have also reviewed measures at the high-risk wards, where many terror suspects are lodged. Senior prison officers said that the Central Reserved Police Force, which guards all entries to the jail, has been given strict directions to maintain a tight vigil. All people, whether in uniform or civil dress, would be let in only after proper verification. No unidentified vehicle would be allowed inside the jail premises without the permission of higher authorities.

“Tamil Nadu Special Police, which guards the cells along with Delhi Prisons staff, has been briefed about the situation. Security personnel on the watchtowers are also closely monitoring movement near the jail boundary. Delhi Police has been roped in to secure areas near the prison complex,” said Mukesh Prasad, Additional Inspector General, Delhi Prisons.

Prasad added that the arrangement of security rings around the complex has been reviewed and strategic changes have been made to ensure a tight vigil.
Jail sources, however, said that lack of adequate number of CCTV cameras, shortage of staff and unavailability of foolproof scanners make the premises vulnerable.