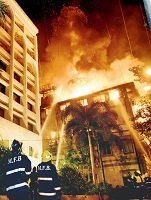 Mumbai’s firefighters who rush in to help citizens in disasters will never again have to worry about battling a financial catastrophe in case they get injured and need treatment. In a first-of-its-kind move, the Brihanmumbai Municipal Corporation (BMC) has proposed in its annual budget to introduce the Accidental Insurance Coverage Scheme for all fire personnel.

According to fire officials, this is the first time any kind of insurance has been proposed for them, although the civic body does provide monetary assistance to families of fire officials who lose their lives in the line of duty. They added that the insurance scheme would definitely benefit the staffers, considering the risk to life during firefighting.

The insurance policy will provide coverage of up to R30 lakh in case of an accident. Apart from that, children of deceased fire employees will receive time-bound financial support for their education, at no cost to the family. What’s more, the insurance scheme won’t cost the taxpayers or the firefighters a single rupee. During the budget speech, municipal commissioner Ajoy Mehta stated that neither the BMC nor the fire personnel would have to pay premium; thus burden will instead be borne by the bank that holds the salaries of the fire department’s employees. To carry out this scheme, the BMC is now looking at bringing all salary accounts of the fire department under one bank. In exchange, the bank will pay the premium on the insurance policies.

PS Rahangdale, CFO said, “This move has been planned to give the staffers more security. The plan is nearing completion, and once the bank is finalised, we will be able to extend these benefits to the department.” A fire official said, “We have never been given any additional insurance apart from the regular medical claims that is part of all BMC employee salaries. The salary accounts of over 2,300 employees will be given to one bank, which will pay the premiums.”