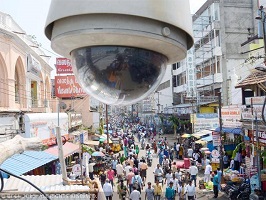 How many CCTV cameras are needed to monitor all of Bengaluru? One city NGO has done the maths: over 900 sensitive junctions across Bengaluru can be effectively covered with round-the-clock CCTV surveillance using around 2,500 cameras. As of now, there are 135 cameras being used by the traffic police as well as their law and order counterparts.

With both the Bruhat Bengaluru Mahanagara Palike (BBMP) and the city police brainstorming over the installation of CCTV cameras across Bengaluru, M. Sharif, founder of Dedicated Servants of India, the NGO, has come forward with an idea to reduce costs. The 95-year-old has suggested a public-private partnership to secure the city, one that will encourage the participation of citizens.

Mr. Sharif, who is ready with his plans, said that under his model, the government’s expenditure would be minimal. According to his plan, any person who is willing to donate a camera can approach the jurisdictional police. He said a decent CCTV surveillance camera costs around Rs. 30,000 — this includes the cost of a set of CCTV cameras, a DVR (digital video recorder) and the installation fee.

One way to bring down costs is to hook a single CCTV camera to an existing DVR network. The cost of a single camera is about Rs. 2,000. If a person donates a camera to be installed in any street, it can be connected to a nearby DVR of an ATM or commercial establishment or residential apartment, thus securing the entire area, said Mr. Sharif. The donor, in return, could get his name advertised. This suggestion has been approved by the civic agencies, he added. The proposal has already got approval at the government level, and the department concerned has been asked to extend all cooperation.